OK, you numbers people. Get your pencils sharpened, because we’re going to draw some stats from our Before the Big Bang tracks.

We have now announced 50 of the 167 tracks appearing on the set; that’s nearly one-third of the total. Those 50 actually give a pretty good sampling of the types of people, material, and decades represented on the CDs. Let’s zoom in more closely.

Number of artists: by our count there are 142 distinct artists (your mileage may differ on the question of artists who paired up). Some 22 performers have an extra recording or two.

Racial coverage: Thirteen recordings are by or feature Black artists, as far as we are aware.

Gender balance: Twenty recordings are by or feature female artists—again, as far as we are aware.

Earliest and latest births represented: The oldest individual represented on the set was born in 1833; the youngest was born in 1902. We don’t have the full personnel of orchestras and bands, however.

Oldest and youngest recording artists: The oldest person to have made a recording featured on the set was 81 years old. The youngest at the time of recording, it would appear, was 19 years old.

No matter how much diversity we would like to see represented in these old recordings, the facts will never match our hopes. However, we sense that the picture we are painting shows a much greater variety of people, places, and things than anyone before imagined or attempted. 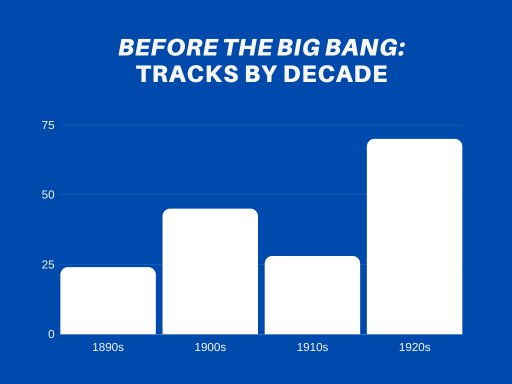