From 1890, here is the oldest item included on Before the Big Bang. It’s an anonymous unaccompanied performer singing the minstrel song “Old Uncle Ned” on a 12.5-cm Berliner Grammophon disc. This was at the point when Emile Berliner had returned to Germany and was developing his new invention, the gramophone, and was making numerous discs for promotion. So that makes this the earliest recording of a Stephen Foster song in existence, and no doubt Berliner’s being an American immigrant caused him to select it for that purpose. Foster wrote “Old Uncle Ned” in 1848; the Haydn Quartet did it in 1902 and 1904, Harry C. Browne’s 1919 recording wasn’t released until 1925, and Fiddlin’ John Carson’s 1924 recording was also released in 1925. In 1932, Laura Ingalls Wilder remembered “Uncle Ned” as part of her childhood Sundays in 1870s Wisconsin in Little House in the Big Woods, the first of the Little House novels. 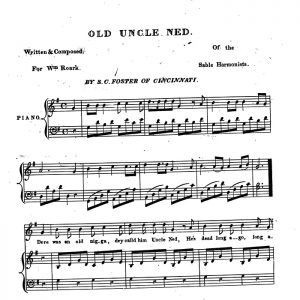