Cindy in the Meadows by Samantha Bumgarner and Eva Davis (1924)

Samantha Bumgarner (1878-1960) and Eva Davis (1888-1969) left their North Carolina homes in April 1924, accompanied by Ernest Thompson, and made the trip to New York City to record what have been celebrated as the first country recordings by Appalachian women. Bumgarner plays fiddle, Davis plays banjo, and here they perform “Cindy in the Meadows,” a traditional folk ballad that may have begun as a play-party song. In fact, the women perform a stanza with lyrics identical to another one in “Old Joe Clark” by the Powers Family. 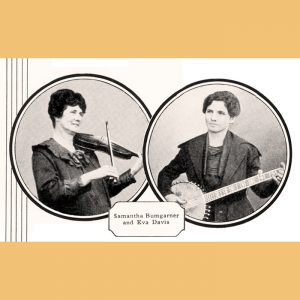