The Preacher and the Bear by Arthur Collins (1905)

“The Preacher and the Bear” was Arthur Collins’ biggest solo hit, and one that he recorded several times over many years for just about every record label. This version, on a 2-minute Edison cylinder from 1905, is the one that arguably most people heard, especially consumers with inexpensive home phonographs. In fact, so popular did Collins’ record become that the song fell into the “folk” culture and people in Appalachia and elsewhere erroneously believed it to be a traditional song. 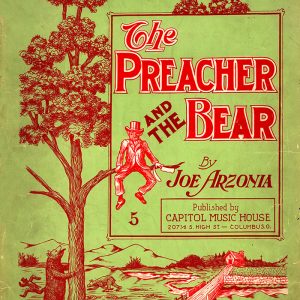