Each of Before the Big Bang’s six CDs has its own theme. They are:

The first four discs survey the roots and resources, influences and inspirations, in American popular music from 1890 to 1925. CDs 5 and 6 cover the “old-time” and “hillbilly” recordings made between 1921 and 1926.

As we said in our last blog post, our exploration is phonograph-centered. What roles did the talking machine play in bringing entertainment into Americans’ homes, and how did it shape that entertainment? Here’s what the concepts mean:

CD 1: The Porch and the Parlor

The phonograph observes and celebrates the traditional American songbook and adds a few of its own to the contemporary mix.
Years covered: 1890-1909

CD 2: The Barn and the Ballroom

The phonograph both witnesses and participates in the creation of American popular dance music. Through the use of various devices such as dance calls, the phonograph sometimes attempts to recreate the atmosphere of a cotillion or a barn dance on records.
Years covered: 1894-1924

CD 3: The Farm and the Factory

The phonograph creates representations of rural and city life, and, in the process, chronicles the cultural clashes between the two. By portraying the simmering conflict and resentment, and the social disaffection and alienation, spawned by the emergence of a modern, urban-industrial America, the phonograph helps give birth to new forms of musical expressions.
Years covered: 1899-1924

CD 4: The Sing and the Schoolhouse

The phonograph acts as educator, preserver, and revivalist, memorializing and celebrating songs and recitations of an historical, regional, ethnic, or racial character.
Years covered: 1896-1925

CD 5: From Shire to Shellac (Tunes)

“Old-time” music was not exclusively an expression of the American South. Several of its earliest fiddlers and stringbands came from the shires of New England and the Midwest. They, along with their southern counterparts, committed to shellac a variegated repertoire of instrumental dance numbers, many of which are still performed today.
Years covered: 1921-1925

“Hillbilly” music was and, in many circles, still is a pejorative term. Many of the singers and musicians who performed before the acoustic horn, however, came to embrace the epithet as a badge of honor. These songs, recorded largely by artists from the American South and its mountainous regions, exemplify a kind of storytelling that, although rooted in the past, revealed a distinctively contemporary character.
Years covered: 1921-1926 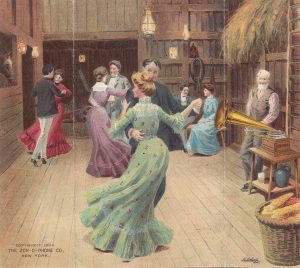